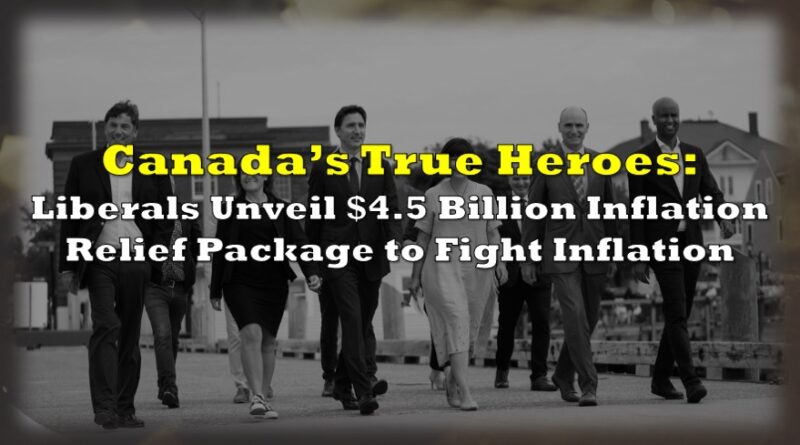 Take a seat and don’t worry: inflation will be over before you know it!

The Liberals are here with a new set of fiscal spending measures to save everyone from the Liberals’ previous fiscal spending measures, in the form of a $4.5 billion inflation relief package to solve inflation. If you thought that more government spending would only accelerate price pressures, Prime Minister Justin Trudeau is here to tell you that you’ve been wrong all along, and that the inflation caused by spending billions of dollars can only be solved by spending billions of dollars more.

The spending package, unveiled on Tuesday in New Brunswick, aims to alleviate inflation pressures for low-income Canadians in the form of child dental care, rent support, and an increase in the GST credit. Trudeau insists the additional injection of cash into the economy is targeted, and will NOT stoke prices higher. “These are things that will make a difference in people’s lives right now but they are also sufficiently targeted, that we are confident that they will not contribute to increased inflation,” he assured Canadians.

although a portion of the package— such as dental care and rent relief— were previously accounted for in the Liberal’s budget announcement back in April, over $3 billion of the funding are new spending initiatives unveiled only now. The dental plan was part of an agreement between the Liberals and the NDP whereby the latter party agrees to back Trudeau’s minority in exchange for advancing various NDP policy actions. The dental plan, called the Canada Dental Benefit, will grant families earning less than $70,000 a $650 benefit per child, which falls to $390 and $260 for families earning less than $79,999 and $89,999, respectively.

The dental program is expected to go live in December, and will benefit about 500,000 Canadians at a cost of $938 million. The Liberals also earmarked $1.2 billion to top-up the Canada Housing Benefit for about 1.8 million Canadians, whereby each low-income renter will receive a one-time payment of $500. Trudeau also plans to double the GST tax credit for six months, at a price tag of around $2.5 billion. The GST benefit, which is indexed to inflation, is currently set at a maximum $467 annually for eligible individuals and $612 for couples, with an additional $161 for each child under 19.

However, major Canadian banks are sounding the alarm over the Liberal’s latest spending bonanza, even pointing out the discrepancy between Trudeau’s perceived fiscal policy implications and unanimously agreed-upon economic principles. “It seems sensible to assume that this will add to pressures on measures of core inflation” in addition to aggravating “the Bank of Canada’s stance on monetary policy,” said Scotiabank head of capital markets economics Derek Holt. “Any belief that it will ease inflationary pressures must have studied different economics textbooks.”

Using revenue windfalls to solve Canada’s inflation problem has also sparked strong criticism from the official opposition, with newly-elected Conservative Party leader Pierre Poilievre warning that additional government spending will not solve the inflation problem for Canadians. “The problem with spending more money as a solution to inflation is that it simply pours more gasoline on the inflationary fire,” he told reporters. Indeed, Trudeau’s spending measures come at a hawkish time for the Bank of Canada, which is aggressively tightening monetary policy with five consecutive interest rate hikes since March, bringing the overnight rate to a current 3.25%.

Although latest CPI figures showed inflation subsiding to 7.6% in July thanks to a decline in gasoline prices, central bank policy makers are pointing out broadening price pressures throughout the economy and sticky core measures, with plans to continue raising rates in the coming months.

Information for this briefing was found via the Government of Canada, the Canadian Press, and the sources mentioned. The author has no securities or affiliations related to this organization. Not a recommendation to buy or sell. Always do additional research and consult a professional before purchasing a security. The author holds no licenses. 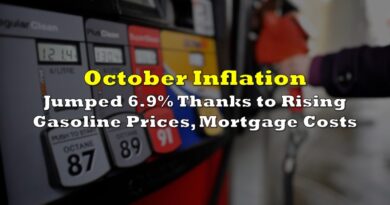 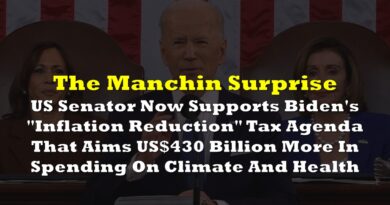 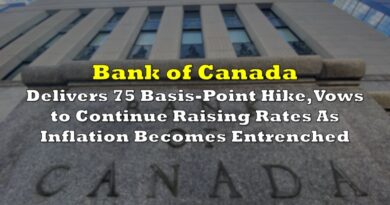