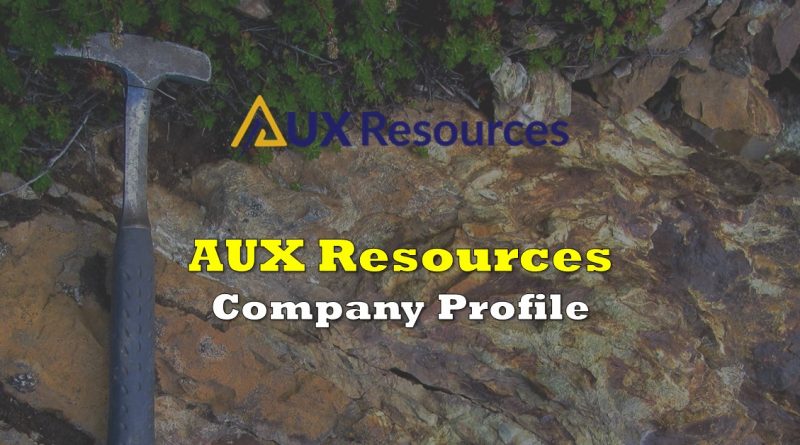 AUX Resources Corporation (TSXV: AUX) is a gold mining company focused on the Stewart Mining Camp in the Golden Triangle region of British Columbia, one of the most prolific mineralized districts in the world.

AUX owns 25,500 hectares of strategic claims, assembled over a 12-year period, in the largely-ignored southern end of the region and is embarking on one of the first comprehensive exploration and drilling programs there. Approximately 35 known mineral showings have been documented in AUX’s claims area, including five past-producing mining operations.

The investment thesis for AUX Resources is based on the following:

The Golden Triangle’s mineral wealth is directly attributable to tectonic shifts in the earth’s plates which occurred millions of years ago.  The Hazelton Group is a Jurassic (201 million to 145 million years ago) volcanic and sedimentary series of strata, or rock units, that was deposited on the Stikine Terrane (Stikinia) of the Canadian Cordillera.  (A terrane is a fragment of crustal material broken off from one tectonic plate and “sutured” to crust lying on another plate.)

Mineral deposits were formed in British Columbia (BC), and especially the Golden Triangle, when Stikinia was formed following the break-up of a geological supercontinent in the Jurassic period.  Indeed, the area holds most of BC’s gold, silver and copper in porphyry, epithermal and volcanic massive sulfide (VMS) deposits.  See below.

Equally important from an investment perspective: despite numerous significant discoveries over the last 15-20 years, the British Columbia government estimated in a 2009 report that only 0.0006% of the Golden Triangle’s mineral riches has been mined.

Surface sampling over a square kilometer which showed gold concentrations of 1+ g/t near the surface, plus visible gold veins, support this thesis.  Most of the prior work in the region was focused inside the perimeter of a past-producing gold mine (the Georgia River Mine) on the property, but the mine now appears to be only on the periphery of the potential hydrothermal system.

The Georgie River Mine, last operated in 1939, consists of a total of 1.2 kilometres of underground access on three levels in total. While explored multiple times since the 70’s, any now-historic work conducted on the mine following the halt of production focused almost exclusively on the area of the existing mine workings, rather than the currently perceived much larger hydrothermal system.

Further, the property hosts a historic, non-compliant resource estimate of 276,400 tonnes of rock grading 27.6 grams per tonne gold and 20.9 grams per tonne silver which is said to be remaining in the mine. The location of the property itself also provides year round access to tidewater, an important aspect should the property get to production.

The Georgia Project is currently being drilled, with results expected to be released in September 2020.

Ian Slater | Chief Executive Officer
Entrepreneur who has founded numerous ventures and has been involved in the Mining industry for over twenty-five years.  A Chartered Accountant, Mr. Slater was previously the Managing Partner of both Ernst & Young’s Canadian and Arthur Andersen’s Central Asian Mining Practices. He is currently the CEO of Libero Copper & Gold.

Paul Metcalfe, Ph.D., P. Geo | Director, VP Exploration
Mineral exploration geologist with over thirty years of experience in regional and property-scale exploration for metalliferous deposits in volcanic and igneous terrains, with a specific focus on the Golden Triangle.

Bradley Rourke | Director
Corporate Finance Executive with over 30 years of experience in Mining, Energy and Real Estate in Western Canada and valuable experience as a principal partner at an investment firm.  Mr. Rourke is a resident of Smithers, BC and is currently the CEO of Scottie Resources with significant experience in the Stewart Mining Camp.

Thomas Mumford, Ph.D., P.Geo | Technical Advisor
Professional exploration geologist with a comprehensive field, technical and academic background in the Golden Triangle.  He is currently the VP Exploration of Scottie Resources.

Lawrence Roulston | Director
Former CEO of Primero Mining and Minera Panama.  Over 25 years of experience in all stages of mining projects in Canada and globally.  Mr. Roulston has extensive experience in the Golden Triangle and is currently CEO of Mountain Boy and a Director of Enduro Metals.

Judy McCall | Corporate Secretary
Ms. McCall brings over 13 years of experience as a corporate and securities paralegal working in both the private and public natural resource sector.  She is responsible for supporting the board of directors and its executives in regulatory, governance and corporate secretarial management.  She has an active role in shareholder and stakeholder engagement as well, and has obtained proficient experience in providing corporate assistance to companies who operate within multiple jurisdictions such as US, BVI and various parts of Latin America.  Ms. McCall has been a member of the Canadian Society of Corporate Secretaries since 2015.

Craig Stewart, Ph.D. | Exploration Manager
Mineral exploration geologist with over ten years of experience.  Craig has a diverse field and academic background in base and precious metal deposits with a focus on gold. He has worked on several major exploration programs, including Kaminak’s Coffee Creek, McEwen Mining’s Grey Fox and Nordgold’s Pistol Bay projects.

Many Canadian junior gold mining companies trade on the TSX.  Below we list a few which have primary projects located in the Golden Triangle.

Some potential catalysts that could have a significant impact on AUX’s share price include:

Gold mining is, by definition, a risky undertaking.  However, AUX Resources appears very well positioned to succeed.  AUX has accumulated 25,500 hectares of mining claims in one of the world’s premier mining regions.  Its 2020 exploration program on its flagship property is fully funded, and the company’s management and Board have many years of gold mining experience in the Golden Triangle.

In terms of valuation, the stock prices of junior mining companies, including AUX Resources, are trading at near-historic discounts to the physical price of gold, which itself seems poised to continue to rally as worldwide governments are showing no interest in slowing money printing operations put in place to battle the COVID-19 pandemic.

AUX Resources Corporation is a marketing client of the CanaCom Group. This is not intended to be used as financial advice. This Report is meant for general information purposes only. This report is not a buy or sell recommendation. The authors are not licensed financial advisors. We encourage readers to seek a licensed financial professional in making investment decisions. Please do your own due diligence and understand the risks before investing.

The information collected for this Report is collected on a best-efforts basis, and/or may not accurately reflect up to date information. All charts and diagrams refer to the prices as of market close September 2, 2020.