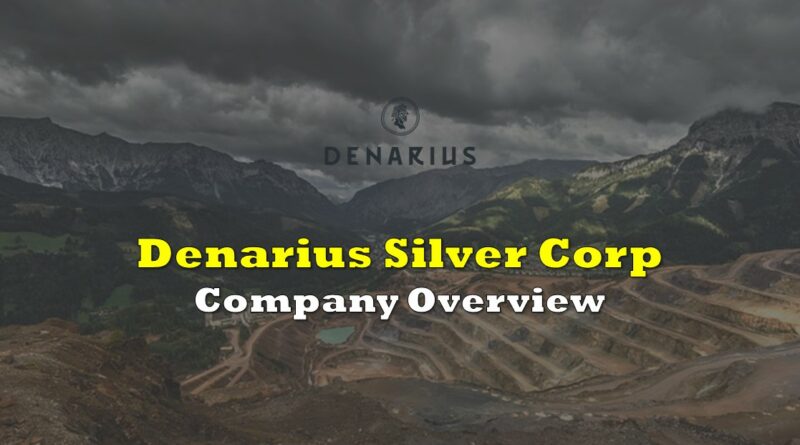 Denarius Silver Corp (TSXV: DSLV) is a Toronto-based junior silver exploration company engaged in the acquisition, exploration, development and eventual operation of mining projects in high-grade districts. The company is focused on developing the past-producing Guia Antigua and Zancudo silver-gold projects in Colombia, and its Lomero-Poyatos project in Spain’s prolific Iberian Pyrite Belt, which hosts the world’s largest concentration of massive sulphides.

The Deep Dive views Denarius Silver as a development-stage exploration company with considerable upside potential and relatively low downside risk. In Colombia, the two DSLV projects are close to Gran Colombia’s flagship Segovia Mine and host to past-producing silver-gold mines that the Company will restart and conduct more extensive exploration to expand the size and scope of the deposits. Positive exploration results could generate interest from larger players and could prompt an exit transaction or strategic partnership for Denarius.

The Lomero-Poyatos deposit is located in the north-east part of the prolific Spanish/Portuguese Iberian Pyrite Belt in the Huelva Province of Southern Spain, one of the world’s most productive volcanogenic massive sulfide IVMS) belts. The site has a well established water, power and highway infrastructure, a reliable local workforce and services, as well as proximity to several high-capacity processing facilities and the port at Huelva.

The Lomero-Poyatos deposit has two separate near-surface mineral deposits, the Lomero to the east and Poyatos to the west, that combine to form a single deposit at depth. Mineralization is said to consist of gold, as well as zinc, lead, and copper. Further, Lomero has one of the largest concentrations of gold mineralization in the region, having assayed 2.0 metres at 14.1 g/t gold as well as 0.55 metres at 16.84 g/t gold.

The Lomero-Poyatos deposit was discovered in 1853 and is a former sulphide pyrite mine with underground development on eight levels, which are currently flooded. The property was initially mined in the late 1850’s as an open pit operation until 1905 when it became an underground mine until its eventual closure in 1991.

Most of the historical production of 2.6 million tonnes came from underground operations, and the mined massive pyrite ore was used as a source of sulphur for sulphuric acid production. The historical resource calculation as per a 2002 NI-43-101 report showed 20.61 Mt of 3.1 g/t gold,  70 g/t silver, 3.3% zinc, 1.2% copper, 1.2% lead, and 37% sulfur. Management believes that because a gravity survey identified anomalies at depth and the deposit is open along strike and down dip, there is potential to significantly increase the resource estimate for the deposit.

A 23,500 metre exploration program is currently underway on the property, with the program slated to consist of 81 drill holes which will include both infill and step out drilling.

The Guia Antigua Project was acquired from Gran Colombia Gold Corp (TSX:GCM), Colombia’s largest underground gold producer and is located in the prolific Segovia-Remedios mining district, Department of Antioquia, 130 kilometers northeast of Medellin. The Guia Antigua Project gives Denarius exploration, development and mining rights under a mining license agreement to a 386-hectare area of the eastern part of Gran Colombia’s mining title RPP-140. The high-grade mines in this region have produced roughly 5 million ounces of gold over a 150 year period.

The Guia Antigua property has a highly productive vein system, and a 2018 drill program discovered 3 new veins which returned values of 3,268 g/t of silver and 8.57 g/t gold over 1.2m, and provides significant potential for additional discoveries. Denarius will focus its exploration activities on the Guia Antigua vein, which has similarity to the geology, structure, vein type, and mineralization of the high-grade Segovia Mine veins.

The Zancudo property is a 1,052-hectare mining concession within the Middle Cauca Gold Belt in the Titiribi mining district in Antioquia, near GoldMining’s (TSX: GOLD) Titiribi Project, about 27 km south of Medellin. It is host to the historical Independencia silver-gold mine, with the region as a whole having historical production of 1.5 million ounces of silver and 2 million ounces of gold equivalent dating back to 1793.

The Zancudo deposit lies within the Romeral terrane, which is located on the western side of the Central Cordillera of the Colombian Andes and is covered by continental sediments. Gold mineralization occurs in two zones, the Upper Zone has flat-lying veins with sandstones, and the lower zone, which runs north-south in steep dipping veins.

The Zancudo Project is currently being explored by IAMGOLD Corp. (TSX: IMG) pursuant to an option agreement for the exploration and potential purchase of an interest in the project, which was previously established by Gran Colombia. Iamgold completed a total of 16,224 meters of drilling at Zancudo between 2017 and 2018 and has incurred over $4 million of its $10 million exploration commitment, but due to covid-19, Iamgold suspended its drilling program in 2020. Denarius expects to form a joint venture with IAMGOLD to advance the project.

Mr. Iacono is Executive Chairman of Gran Colombia Gold Corp, and has over 30 years experience in capital markets and public companies, having raised in excess of $4 billion for numerous natural resource projects internationally in Latin America, Canada and the United States. He was a co-founder of Bolivar Gold Corp and Pacific Stratus, and has served as a director and senior executive for a number of resource companies including Pacific Exploration and Production Corp and PetroMagdalena Energy Corp.

Mr. Davies holds a B. Commerce degree from the University of Toronto and has over 20 experience as a Chartered Professional Accountant (Ontario) for a number of international and public natural resources companies, providing financial management and strategic planning. He has served in senior management positions several resource companies, including with PetroMagdalena Energy Corp., Coalcorp Mining Inc., Medoro Resources Inc., and LAC Minerals Ltd.

Mr. Couch is a senior financial services executive with extensive experience in the natural resources sector, having advised and raised capital for clients globally, with a particular focus in emerging markets. He has advised several governments on their natural resources capital requirements and has served as a director for a number of resources companies. Mr. Couch works with Orion Resource Partners, a mining focused private equity firm with $6 billion under management, and previously held senior investment banking positions at several large international banks, including BMO Capital Markets (Bank of Montreal), Credit Suisse Europe and Citigroup.

Colombia is rich in minerals and base metals, which are dispersed throughout the country, and include silver, gold, copper, platinum, emeralds, coltan, and coal. The country has had a long history of gold and silver mining. Although there are a number of gold mines operated by publicly-traded companies in the central and southern parts of the country, much of Colombia’s gold and silver mining production comes from artisanal miners. The Segovia-Remedios mining district is a prolific gold mining district that hosts a number of rich gold mines, yet despite that, the region is still largely unexplored.

In Colombia, the Zancudo and Guia Antigua Projects are close to several medium and large-scale producers, including:

Other exploration companies in the area include:

Antioquia Gold Inc (TSXV: AGD) is a Calgary, Alberta-based mineral exploration and development company that is engaged in the acquisition, exploration, and development of mineral resource properties in Colombia. The company’s project includes their flagship Cisneros project, a 5,630 hectare property located in the central portion of the department of Antioquia, about 80 kilometers northeast of Medellin. The Cisneros mine commenced production in 2019 and the Company is actively exploring the rest of the property to further delineate the size and scope of the deposit.

Soma Gold Corp. (TSXV: SOMA) is a Vancouver-based junior exploration and development company that owns and operates three producing gold mines on a 29,000 hectare property in Antioquia, Colombia within the Central Cordillera of the Andes Mountains. The ore extracted from the La Ye, El Limon and Nechí projects is processed at two mills operated by the company. The mills also process ore from local artisanal miners. Soma is actively continuing its exploration activities to add to its gold reserves.

Gran Colombia Gold Corp (TSX:GCM) is a Toronto-based gold and silver exploration, development and production company with a focus on gold projects in the South American countries of Colombia and Guyana. The Company’s flagship asset in Colombia is the Segovia Project, which hosts the El Silencio gold mine that produced 225,000 ounces of gold in 2020. It is considered to be one of the world’s highest-grade gold mines with proven and probable reserves of over 632,000 ounces at an average grade of 8.92 g/t gold. Gran Colombia is actively exploring the Segovia project that has several other mineralized zones on the property.

O2Gold Inc. (TSXV: OTGO) is an early-stage Canadian mineral exploration company focused on the acquisition and development of mineral projects in Colombia, South America. The Company’s management and professional teams are based in Medellin, Colombia, and have extensive experience in the region. Its Otú Central Project is a 30,000 hectare property comprising 26 mining claim titles and applications located on the Otú Fault and is in close proximity to several other gold producers in the Segovia and Zaragoza regions of Antioquia in Colombia. During the second half of 2021, O2Gold will be actively drilling its Aurora-Quintanillo trench to determine its production strategy to validate its 30 year mining license and to generate cash flow that will help fund the Company’s other exploration activities on the Otú property.

The Iberian Pyrite Belt is arguably the world’s most productive volcanic-hosted massive sulphide (VMS) district with over 80 known deposits producing copper, zinc, lead, gold, silver and tin. The belt hosts eight giant-sized deposits of more than 100 million tonnes of massive sulphides and a number of major mining companies such as Lundin Mining, Trafigura Mining Group and ALMINA have major operations in the region. Aside from Denarius, there are several other junior companies exploring in the vicinity.

Aside from Denarius there are several other junior companies exploring in the vicinity.

Vancouver-based Pan Global Resources Inc (TSXV: PGZ) is a junior exploration company that is developing its Aguilas and Escacena projects in the Iberian Pyrite Belt in southern Spain. The Escacena property is in close proximity to the past-producing Aznalcóllar and Los Frailes mines, and First Quantum’s Las Cruces operating copper mine, 40 km from Seville.

Emerita Resources Corp (TSXV: EMO), is a Canadian resource company currently developing two world-class zinc projects in Spain. The first project, the Iberian Belt West property, has a historical resources estimate of 34.0 tonnes of 0.42% copper, 1.10% lead, 2.30% zinc, 44.0 g/t silver and 0.80 g/t gold. It’s second project, which it expects to be awarded soon, meanwhile hosts a deposit of 20.0 tonnes of of +10% zinc, lead, and silver in an open pit model.

Denarius Silver Corp is well-positioned in two prolific mining districts in Spain and Colombia which offer shareholders a degree of diversification and somewhat helps de-risk the company. Any meaningful exploration results on the properties could lead to a takeover or joint venture event. The company plans to commence production on its Lomero-Poyatos project in Spain as soon as feasible and will be conducting drilling to expand the size of the deposit and to increase its resources. 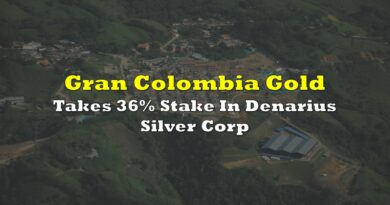 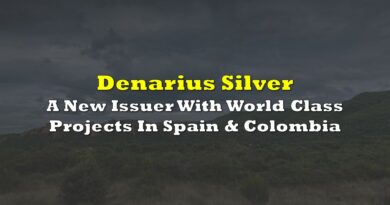 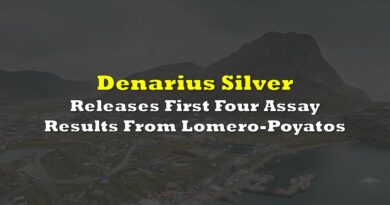