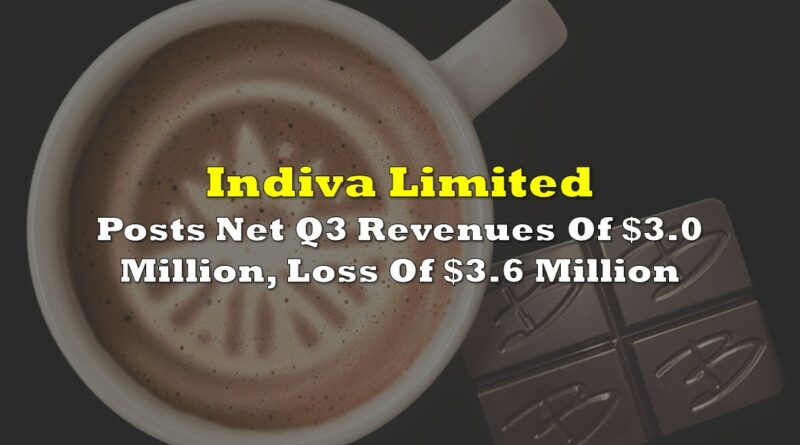 Indiva Limited (TSXV: NDVA) this morning reported its third quarter financial results, posting revenues of $3.0 million for the period ended September 30, 2020, along with a net loss of $3.6 million. Revenues were up on a quarter over quarter basis, with the second quarter seeing revenues of $2.6 million on a net basis comparatively.

With net revenues of $3.0 million, cost of goods sold amounted to $2.4 million, while inventory writedowns accounted for a further $0.1 million, resulting in a gross margin of $0.5 million for the three month period. The margin posted is a notably improvement from last quarters figure which came in at $21,478 before fair value adjustments, with no inventory impairments recorded at the time.

Total operating expenses meanwhile amounted to $2.2 million, meaning the company is still not operating at a scale that will allow for profitable operations. The largest expense here is general and administrative at $1.6 million, followed by marketing and sales of $0.4 million. Expenses were up considerable on a quarter over quarter basis, with the second quarter seeing only $1.6 million in expenses.

Overall, loss from operations amounted to $1.7 million before addition other expenses dragged things down further. For instance, the company took a $0.7 million loss on non-refundable deposits, as well as a $0.4 million provision for onerous contracts. Also notable is an interest and financing expense of $0.3 million. All told, the company reported a loss of $3.6 million for the three month period.

Looking to the balance sheet, the company looks to be in a slightly tough financial position. Cash held by the company remained flat quarter over quarter at $0.4 million, despite the company seeing total cash inflows from financing activities of $4.8 million during the period. Funds during the quarter came from both equity issuances as well as an advance on a secured bridge loan.

Accounts receivable meanwhile climbed from $1.1 million to $3.1 million, indicating a significant portion of the quarters sales have not yet seen funds received. In fact, based on the aging data provided by the company, $3.0 million of the current receivables are from the current quarter – a positive in that there’s minimal overdue receivables, but a negative in that the company appears to have a longer cash flow cycle. Inventory meanwhile fell from $10.4 million to $9.7 million, while prepaid expenses climbed from $0.5 million to $0.6 million. Total current assets overall grew from $12.6 million to $14.3 million.

Indiva Limited last traded at $0.21 on the TSX Venture. 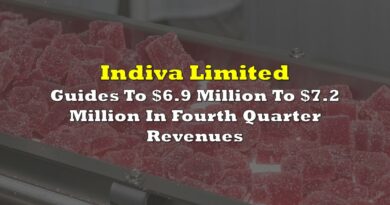 Indiva Guides To $6.9 Million To $7.2 Million In Fourth Quarter Revenues 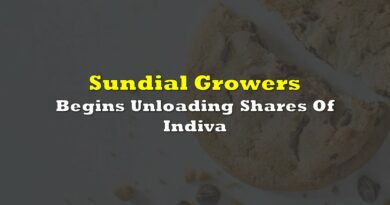 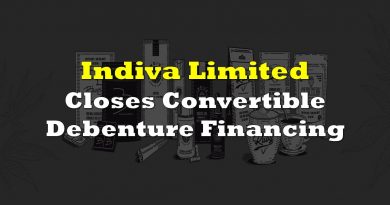