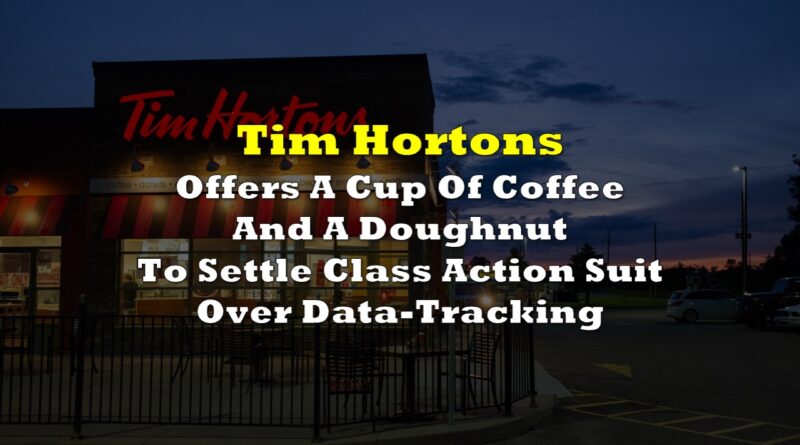 Tim Hortons has announced that they have reached a proposed settlement in multiple class action lawsuits over accusations that the restaurant chain’s mobile app secretly tracked its users, violating customer privacy laws. And the settlement is that they would offer a free coffee and a doughnut.

Okay, it’s not strictly coffee and a doughnut: affected users get to choose one (1) hot beverage, and one (1) baked good.

Not surprisingly, people had some difficulty processing the proposal. James McLeod, whose Financial Post report triggered the investigation into Tim Hortons’ app, expressed his disbelief on Twitter over the weekend. In 2020, McLeod discovered and wrote about how the app had tracked his location over 2,700 times in less than five months.

The company says that the settlement, which is currently still a proposal, requires court approval before it’s enacted.

Tim Hortons was investigated by federal and provincial privacy watchdogs, and they found that the chain violated the law when it collected vast amounts of geolocation information from customers through the mobile app. A report released by last month said that privacy commissioners found that the app tracked and recorded users’ movements every few minutes, even when they weren’t running the app.

The chain stated in court documents that it would permanently wipe any geolocation information that the app may have collected from April 1, 2019 to September 30, 2020. It would also direct its third-party providers to do the same.

Lawyers, notably, have negotiated to be paid in cash instead however.

Information for this briefing was found via Twitter, Financial Post, and the sources mentioned. The author has no securities or affiliations related to this organization. Not a recommendation to buy or sell. Always do additional research and consult a professional before purchasing a security. The author holds no licenses.