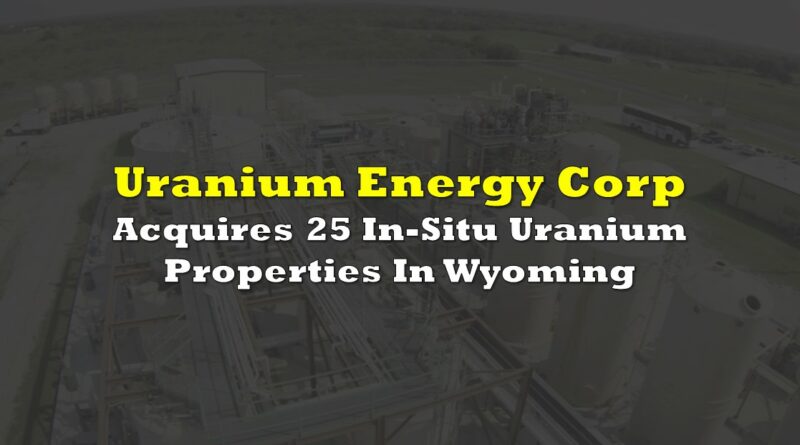 Uranium Energy Corp (NYSE: UEC) is looking to capitalize on recent comments made by the Biden Administration related to the purchase of $3.5 billion in domestic uranium. The firm this morning revealed it has conducted a property exchange to grow its US landholdings, while also having certain receivables settled.

The company this morning indicated that a total debt of $18.3 million owing to it as a result of the recent purchase of Uranium One Americas has been settled with Anfield Energy (TSXV: AEC). The company has received $9.17 million in cash for the settlement of the money owed, as well as 96.3 million units of Anfield, with each unit containing one common share and one warrant, with warrants valid for five years at $0.18 per share.

The company now owns a 16% stake in Anfield, which grows to 27% on a partially diluted basis.

Perhaps more interesting however, is a property exchange that was entered into with Anfield. UEC has acquired a total of 25 in-situ recovery uranium projects within the state of Wyoming, in exchange for its Slick Rock and Long Park projects that are based in Colorado.

The new properties collectively comprise of 55,119 acres of claims and leases, which has seen a total of 7.1 million feet (2.16 million metres) of drilling conducted on it historically. The projects also house a historical resource of 12.6 million pounds of U3O8. The most interesting property within the portfolio appears to be the Charlie project, which is 90% surrounded by the firms Christensen Ranch property, with the property seeing a continuation of the orebody.

The Charlie project is expected to have its standards updated to meet ISR mining requirements, after which it will represent two additional mine units of the Christensen Ranch project. The property presently has a Department of Environmental Quality Permit to Mine. The property is said to have 3.1 million pounds of U3O8 on an indicated basis at 0.12%, along with 988,000 pounds at 0.12% on an inferred basis within a historical estimate.

“The transactions also include a property swap allowing us to consolidate 25 additional uranium properties into our Wyoming portfolio including the Charlie project which will be incorporated into our future mining operations at the Christensen Ranch project.  As a result, UEC will control the largest ISR uranium portfolio in the United States,” said CEO Amir Adnani of the transaction.

Uranium Energy Corp last traded at $4.57 on the NYSE. 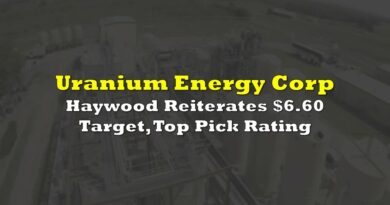 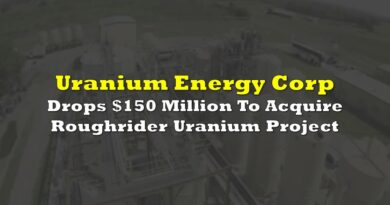 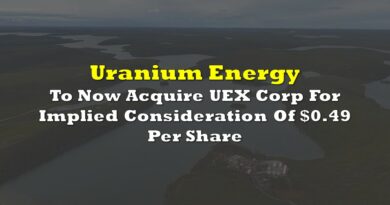