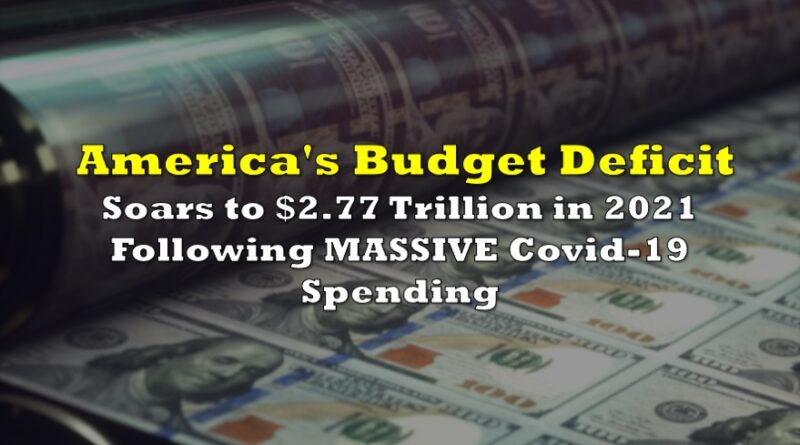 The US racked up yet another record budget deficit for the fiscal year 2021, as the government continued its spending spree throughout the Covid-19 pandemic.

The deficit hit $2.77 trillion from October 2020 through to September 2021, marking the second-largest deficit on records dating back to 1945— aside from last year’s eye-watering shortfall of $3.1 trillion, of course. The current deficit amounts to 12.4% of the country’s GDP, down from 15% from the year prior. Compared to the pre-pandemic period, America’s deficit only totalled approximately 4.6% of GDP in 2019.

Government spending jumped 4% to $6.8 trillion for the fiscal year 2021, while federal revenue increased 18% to $4 trillion, mostly due to higher tax collection from high-wealth individuals and corporations. Total government borrowing was up $1.3 trillion to $22.3 trillion, as borrowing from the public declined to 99.5% of economic output— down from 100.3% in the fiscal year 2020.

Despite a modest decline from last year’s bottomless government spending, it is worthwhile noting that up until recent, budget deficits have failed to reach such astronomical levels. Following the 2008 financial crisis, shortfalls for the fiscal year 2009 hit $1.4 trillion, as the federal government embarked on significant spending initiatives in an effort to keep businesses and corporations from collapsing.

The Congressional Budget Office has praised the latest figures, and is now forecasting that America’s budget deficit will slump to $1.15 trillion in the current fiscal year, followed by moderate declines in the subsequent years. However, that forecast may hit a rude awakening, as there are currently two massive infrastructure bills to the tune of trillions of dollars sitting in Congress. But, President Joe Biden has maintained that they will not affect the country’s national debt position, reassuring the public that new taxes and increased revenues will balance everything out.

Moreover, the US is also facing an impending debt crisis at its heels, as Democrats and Republicans delved into political theatrics earlier this month over the issue of raising the government debt ceiling, after Janet Yellen’s crocodile tears warned of an unprecedented debt default within weeks. As widely expected, though, a short-term solution was passed, given that a debt default would of course be preposterous, pushing the long-term headache of what to do with the debt ceiling until December.

Information for this briefing was found via the Treasury Department. The author has no securities or affiliations related to this organization. Not a recommendation to buy or sell. Always do additional research and consult a professional before purchasing a security. The author holds no licenses.