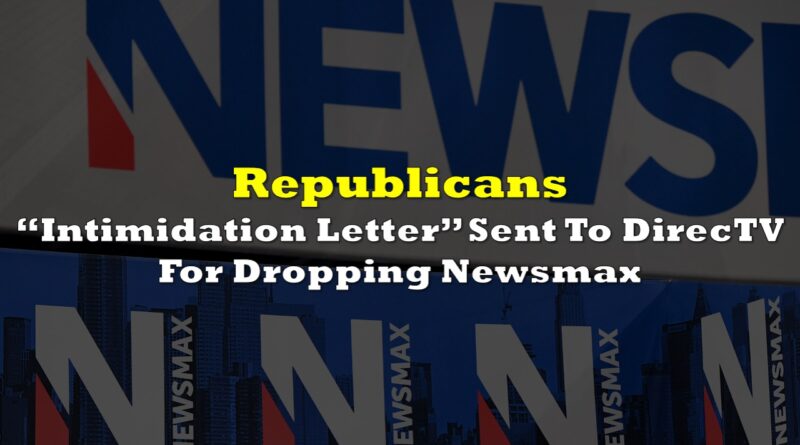 Cable television provider DirecTV is to drop conservative network Newsmax this week, according to a letter sent by House Republicans last week urging the media company to keep the channel on its lineup.

Texas Rep. Wesley Hunt, a frequent guest on Newsmax, accused DirecTV and its corporate owners—AT&T and TPG Capital—on Friday of “moving to de-platform Newsmax by denying it cable fees on a fair and equitable basis.” The letter was co-signed by 41 Republicans.

The move to drop Newsmax follows the provider’s decision in April 2022 to remove pro-Trump One America News Network (OANN) from its lineup, a move that was soon followed by Verizon Fios in August.

“If Newsmax is removed from DIRECTV, in less than a year House Republicans will have lost two of the three cable news channels that reach conservative voters on a platform that primarily serves conservative-leaning areas of the country,” the letter said.

Hunt said that the provider’s failure to reach an agreement with Newsmax over cable fees signals “a political decision to censor conservative media, which is a red flag for the First Amendment.”

“It is our understanding that DIRECTV – still majority-owned by AT&T and minority-owned and managed by TPG Capital – is moving to de-platform NEWSMAX by denying it cable fees on a fair and equitable basis,” the letter added. “It is our understanding that DIRECTV carries 11 liberal news and information channels including Vice Media. The same individuals who sit on DIRECTV’s board of directors also sit on Vice Media’s board of directors. Coincidentally, based on Kagan estimates, Vice Media appears to receive higher fees than NEWSMAX is requesting despite having a fraction of the audience.”

The lawmakers requested that DirecTV “provide to us the ratings for each of the networks noted above, with comparison data, including set-top box data, on all the other networks that are carried by DIRECTV, and the corresponding fees paid by your company to these networks.”

The letter also mentioned that in February 2021, some Democratic members of the House Energy and Commerce Committee asked providers if they planned to “continue carrying Fox News, Newsmax, and OANN,” claiming the channels were “misinformation rumor mills and conspiracy theory hotbeds that produce content that leads to real harm.”

After the 2022 midterm elections, the Energy and Commerce Committee is now chaired by Republican Rep. Cathy McMorris Rodgers from Washington.

“Given the jurisdiction of the Energy and Commerce Committee over your companies’ business interests, it is reasonable to assume you took this letter seriously and complied with these demands,” the Republicans noted in the letter.

Meanwhile, a DirecTV representative told The Daily Beast that the network is currently attempting to charge far more than the provider believes is in the best interests of its customers.

“We’ve discussed with Newsmax on several occasions that we’d like to offer their programming, however, the network is now seeking significant fees that we cannot pass on to our broad customer base,” a DirecTV spokesperson said in a statement. “Additionally, the same programming offered by Newsmax today is already available at no charge to 100% of U.S. households including our customers via NewsmaxTV.com, YouTube.com and on multiple streaming platforms like Amazon Fire TV, Roku and Google Play.”

At 11:59 p.m. on Tuesday, Newsmax will be removed from DirecTV’s satellite lineup, according to Hunt’s office.

Information for this briefing was found via Washington Examiner, The Daily Beast, and the sources mentioned. The author has no securities or affiliations related to this organization. Not a recommendation to buy or sell. Always do additional research and consult a professional before purchasing a security. The author holds no licenses.

The Commissioner of Canada Revenue Agency (CRA), Bob Hamilton, has stated that it is not worth conducting a full review