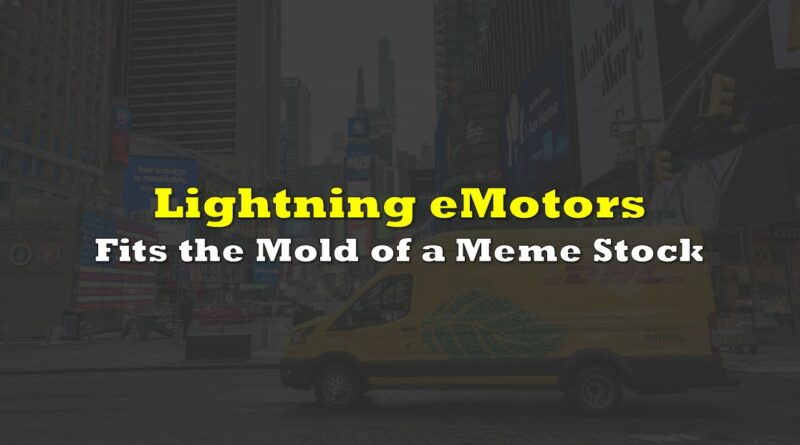 In light of recent outsized moves by meme stocks catalyzed by investors’ expectations of a potential short squeeze, Lightning eMotors, Inc. (NYSE: ZEV), a manufacturer of powertrains and commercial zero-emission vehicles (ZEVs), could be a candidate for such a move.

Indeed, Fintel, a research firm focused on financial markets data, recently labeled Lightning as one of the stocks most likely to be squeezed. In this market, a stock’s high valuation based on fundamentals seems not to deter a sharp, prolonged movement higher, a recent example being Support.com (NASDAQ: SPRT).

Lightning has announced some major recent contracts. For example, on August 10 the company reached a strategic partnership with Forest River, Inc., the leading shuttle bus producer in North America and a subsidiary of Berkshire Hathaway, to deploy up to 7,500 zero-emission shuttle buses. Over the next 4 ½ years, Lightning will manufacture ZEV powertrain systems at its Colorado plant and ship them, together with charging products, to Forest Rivers’ Indiana plant for final assembly. The agreement could generate US$850 million in total revenue for Lightning.

On August 31, Lightning reached a similar (but smaller) accord with the Collins Bus unit of REV Group, Inc. Lightning will provide the powertrains for 100 all-electric Type A school buses expected to be delivered across the U.S. and Canada over the next few years. The agreement includes a firm order commitment worth US$11 million to Lightning over the next two years.

Lightning is the product of a SPAC merger with SPAC sponsor GigCapital3. The merger closed in late April 2021, about a year after its May 2020 announcement. The closure of the merger, which included a US$125 million PIPE led by BP Technology Ventures, is the key reason that Lightning’s June 30 cash balance totaled US$202 million, or about 30% of its stock market capitalization.

As of August 13, Lightning’s short interest was 6.14 million shares, or 8% of shares outstanding. Perhaps more importantly, the company’s short interest represents around 19% of its float. Furthermore, Fintel reports that the annualized cost to borrow the shares (a precursor to shorting them) is about 87%, a figure so high that shorts could decide that the cost of maintaining their positions is too expensive.

Lightning is a highly valued stock. It trades at an enterprise value-to-annualized revenues ratio of more than 20x. This elevated valuation could limit any upside, regardless of its high short interest.

Lightning fits the mold of many successful meme stocks: a moderate stock market capitalization (around US$650 million), an elevated valuation based on fundamentals, and heavily shorted. The second factor may limit the performance of the stock, but we would caution investors that maintaining or establishing a short position seems risky given the possibility of a short squeeze.

Lightning eMotors, Inc. last traded at US$9.11 on the NYSE.