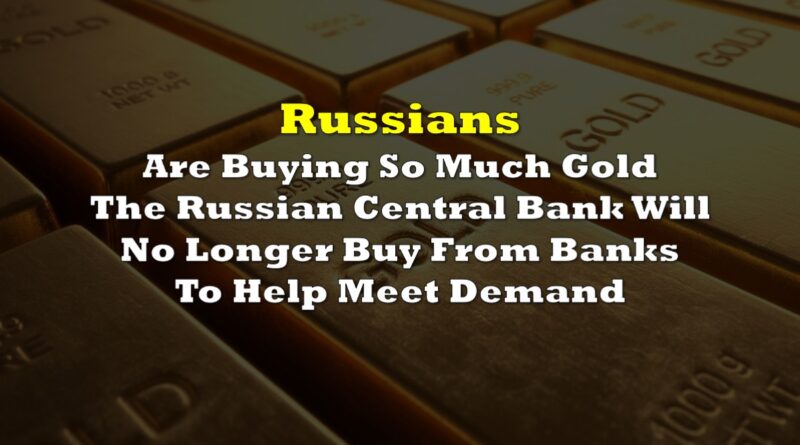 As the ruble continues to tumble after Russia’s invasion of Ukraine, citizens are buying gold from their local banks. To help meet demand, the Russian Central Bank has decided that it will stop its own gold purchases from banks starting on Tuesday.

A report from Reuters quoted a statement from the central bank saying that the increase in household demand for the precious metal was driven “in particular, by the abolition of value-added tax on these operations.”

Following their attack on Ukraine, Russia has faced stiff economic sanctions that resulted in the collapse of the ruble, which is now just worth $0.0091. Buying gold is one of the last few ways Russians are safeguarding their wealth.

The wealthy were also earlier reported to have been buying luxury items such as jewelry and watches, but the US and the EU have since prevented the export of luxury goods to Russia as part of the many sanctions placed against them.

The decision to stop buying gold from local banks comes just less than a month after the central bank resumed buying from domestic gold markets after it stopped in March 2020 when prices spiked at the start of the pandemic.

Before the two-year pause, Russia went on a six-year buying binge of the precious metal. They had, according to the International Monetary Fund, accumulated a hoard of over 2,000 tons at the end of January this year.

Information for this briefing was found via Reuters, the IMF and the companies mentioned. The author has no securities or affiliations related to this organization. Not a recommendation to buy or sell. Always do additional research and consult a professional before purchasing a security. The author holds no licenses.