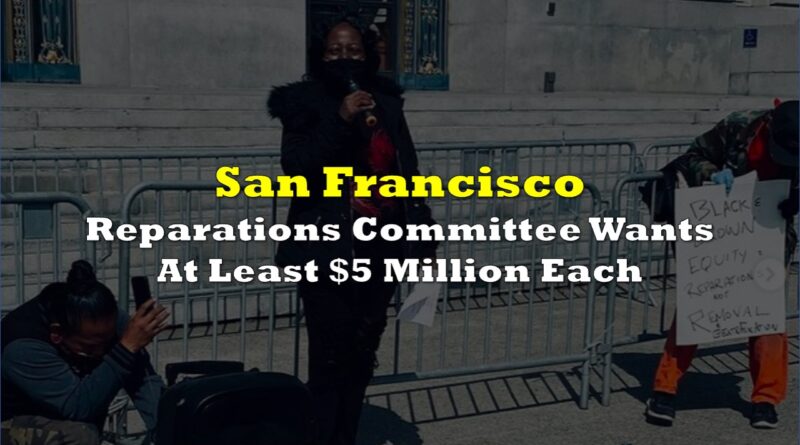 A San Francisco committee has proposed a payment of $5 million and debt forgiveness for all eligible members of its Black community for the decades of systemic repression and harm that they’ve experienced.

The San Francisco African American Reparations Advisory Committee (AARAC), which was established in December 2020 by the Board of Supervisors to advise and help the city develop a plan to address reparations, released a draft of its report in December. While California was not officially a slave state, reparations are for “the public policies explicitly created to subjugate Black people in San Francisco by upholding and expanding the intent and legacy of chattel slavery.”

“While neither San Francisco, nor California, formally adopted the institution of chattel slavery, the tenets of segregation, white supremacy and systematic repression and exclusion of Black people were codified through legal and extralegal actions, social codes, and judicial enforcement,” the committee wrote.

In recent years, the city has continued to show a significant racial wealth cap. While it’s home to 116 of the country’s billionaires, many of which are in the tech sector, its unhoused population remains on an upward trend despite slightly decreasing in 2022 to 7,754. The unhoused population disproportionately leans toward the Black community, with over 38%, even if only 6% of the city’s 922,650 residents are Black.

In their draft plan, the AARAC recommended a one-time lump sum payment of $5 million to “compensate the affected population for the decades of harms that they have experienced, and will redress the economic and opportunity losses that Black San Franciscans have endured, collectively, as the result of both intentional decisions and unintended harms perpetuated by City policy.”

The committee also emphasized that Black households are more likely to “hold costlier, riskier debt, and are more likely to have outstanding student loan debt,” and when combined with lower household incomes, this “can create an inescapable cycle of debt,” therefore recommending to establish a comprehensive debt forgiveness program.

The AARAC also recommends supplementing the city’s lowest-income earners to reflect the Area Median Income (AMI) for at least 250 years. The 2022 AMI for San Francisco is $97,000.

“By elevating income to match AMI, Black people can better afford housing and achieve a better quality of life,” the AARAC wrote.

The committee’s recommended eligibility requirements state that an applicant must have “identified as ‘Black/African American’ on public documents for at least 10 years” and be at least 18 years old. They must also meet at least two criteria from the following list:

How much the plan will cost the city

While the draft plan does not give a computation of how much the recommendations will cost the city, it is expected to be at least $200 billion — well above the city’s 2022-2023 budget of $14 billion.

Mayor Landon Breed’s office in December predicted a budget deficit of around $728 million over the next two years from a lower-than-expected collection of real estate taxes. The mayor asked departments to prepare for 5% to 8% budget cuts.

The plan was submitted to the city’s Board of Supervisors on December 23, around the same time the mayor asked departments to prepare for budget cuts. AARAC told Fox News Digital that they have yet to receive feedback from the board, nor have they received word of a hearing to formally discuss the plan.

On a federal level, House Democrats are seeking to establish a national reparations committee.

Information for this story was found via the sources and the companies mentioned. The author has no securities or affiliations related to this organization. Views expressed within are solely that of the author. Not a recommendation to buy or sell. Always do additional research and consult a professional before purchasing a security. The author holds no licenses.