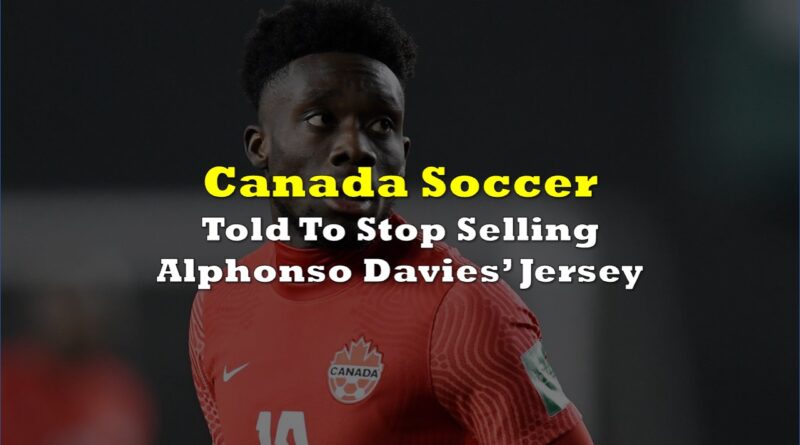 The Canadian soccer federation has been told to halt selling Alphonso Davies’ national team jersey as the governing body and the player’s agent have not come to an agreement on the right to market the player’s likeness and image.

Nick Huoseh, the agent representing Davies, in late September informed Fanatics, the largest online seller of licensed sports merchandise, that it no longer had permission to sell Davies’ jersey on its site and the Canada Soccer website, which the company also operates, citing that the governing body has not negotiated for the right to market Davies’ likeness and image.

“National team players have never received royalties from jersey sales, and they should,” Huoseh said in an interview with TSN. “We only want what’s fair and they absolutely can and should do this.”

A month before the jersey dispute, a Gatorade ad was created to celebrate the Canadian men’s national team’s unexpected qualification into the World Cup in Qatar — the first since 1986. It featured Davies and three other players and was sent to Huoseh for approval. Huoseh rejected the ad and told Canada Soccer chief marketing officer Sandra Gage that no brand, other than those that the star player has personal deals with, has permission to use his image in any ads.

It’s not unusual for World Cup teams to have profit-sharing deals with their players. But it’s a peculiar case for Canada Soccer, due to its controversial deal with Canadian Soccer Business, which Braden Maccke dives into here.

Information for this briefing was found via TSN, DeanBlundell.com, and the sources and companies mentioned. The author has no securities or affiliations related to this organization. Not a recommendation to buy or sell. Always do additional research and consult a professional before purchasing a security. The author holds no licenses.