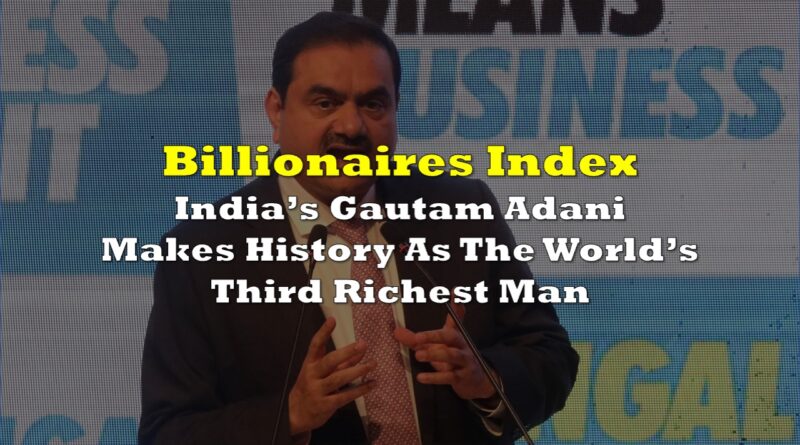 The world’s third richest person, for the first time ever, is from Asia.

Gautam Adani, an infrastructure tycoon from India, overtakes LVMH Chairman Bernard Arnault on the Bloomberg Billionaires Index, with a net worth of approximately $137 billion.

Adani, who is 60 years old, is the founder of the Adani Group, which controls companies across industries — from ports and aerospace to solar energy and coal. A college dropout, he began as a diamond trader before turning to coal and setting up a commodities export firm in 1988.

Like many billionaires, the Ahmedabad native’s fortune grew exponentially during the pandemic. Shares of Adani Enterprises, the group’s flagship, soared over 1,000% on the National Stock Exchange in Mumbai as investors bet on the billionaire’s ability to succeed in industries that are key to Prime Minister Narendra Modi’s long-term economic development goals, including infrastructure and renewable energy. The Adani Group controls India’s largest private-sector port and airport operator, city-gas distributor, and coal miner.

But it was coal that fueled his ascent to the world’s richest list. The billionaire owns Abbot Point, a coal mining project in Australia, whose Carmichael coal mine is billed as one of the world’s largest. The project has been controversial as its been criticized by environmentalists, and so in November, Adani pledged to invest $70 billion in green energy to become the world’s largest renewable-energy producer.

Meanwhile in India, Adani announced last week a hostile bid to take over New Delhi Television (NDTV), an influential news media company. According to a CNN report, the deal is being pursued by AMG Media Networks, a unit of Adani’s conglomerate.

The report also notes that the group’s foray into mass media coincides with a period when the company’s “debt-fueled rapid expansion” has started to raise red flags. And as can be expected, the bid is also a red flag for NDTV’s future editorial freedom as one of the country’s most respected news networks.

As Adani’s wealth jumped over the past two years, some lawmakers and market watchers have called attention to opaque shareholder structures and a lack of analyst coverage at Adani Group companies.

The ‘new look’ of the Bloomberg Billionaires Index also has a lot to do with the world’s richest billionaires’ decision to funnel more of their money into their philanthropy. In July, Bill Gates said he was transferring $20 billion to the Bill & Melinda Gates Foundation. Warren Buffet, meanwhile, has already donated over $35 billion to the charity.

Adani, for his 60th birthday, said he would donate $7.7 billion to social causes that aim to boost health, education, and skill development.

Information for this briefing was found via Bloomberg, CNN, and the sources and companies mentioned. The author has no securities or affiliations related to this organization. Not a recommendation to buy or sell. Always do additional research and consult a professional before purchasing a security. The author holds no licenses.