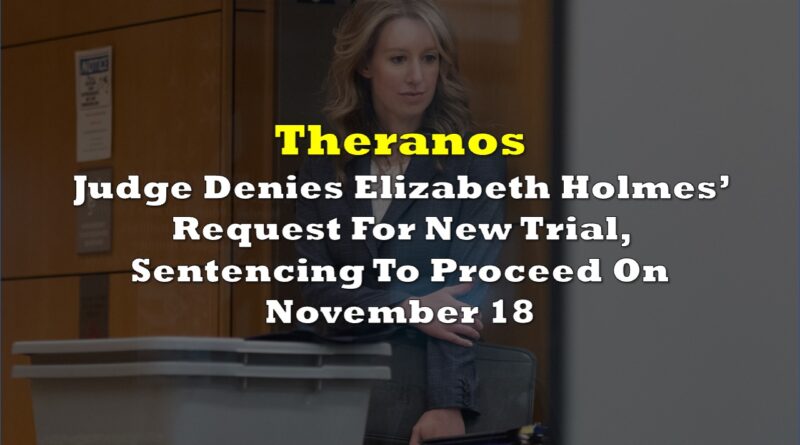 Elizabeth Holmes, the disgraced founder of Theranos, will be sentenced on Friday, November 18 following an attempt to delay sentencing with a motion for new trial on the account of “newly discovered” evidence. The motion was denied by a federal judge on Monday.

The 38-year-old disgraced former Silicon Valley star was found guilty of defrauding investors, to whom she made promises of a groundbreaking blood-testing technology that failed to materialize. She was convicted of three counts of wire fraud, with each carrying up to 20 years in prison, and one count of conspiracy to commit wire fraud, which carries a maximum of five years.

Holmes filed the motion for a new trial after Adam Rosendorff, a former Theranos lab director and a key witness in the trial, paid her a visit in August. Holmes’ lawyers allege that during his visit, Rosendorff had expressed remorse over how he presented Theranos in court. Holmes’ partner Billy Evans claims that Rosendorff had told them that “he tried to answer the questions honestly but that the prosecutors tried to make everyone look bad.”

“In the months following Elizabeth Holmes’ conviction I started to feel increasingly distressed and uncomfortable at the prospect her young child would spend the formative years of their life without their mother,” the former lab director told an attorney for Holmes. “And I understand Ms. Holmes may be pregnant again.”

Holmes gave birth to her first child in July and did appear to be pregnant again when she went to court in October.

United States District Judge Edward Davila ruled that the arguments brought forward by the Theranos founder’s lawyers for a new trial did not have enough merit to prove allegations of government misconduct, and the statements that the lawyers were referring to as newly discovered evidence were not material to result in an acquittal.

While Holmes is facing a total of up to 65 years in prison, legal experts are saying it’s unlikely she will get anything close to that. Holmes’ lawyers are expected to file an appeal following next week’s sentencing.

Information for this briefing was found via Reuters, CNBC, and the sources and companies mentioned. The author has no securities or affiliations related to this organization. Not a recommendation to buy or sell. Always do additional research and consult a professional before purchasing a security. The author holds no licenses. 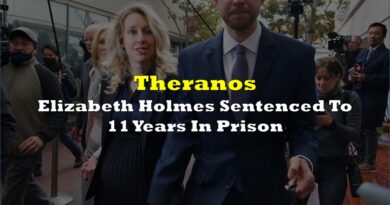 The Theranos Saga Has Ended: Elizabeth Holmes Sentenced To 11 Years In Prison