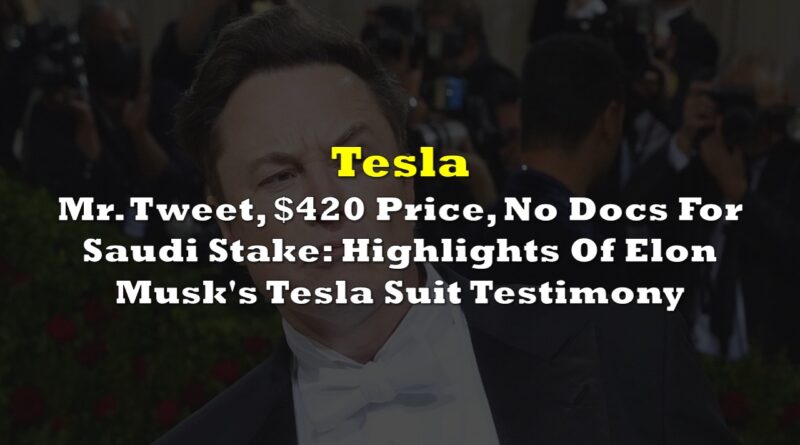 Tesla (NASDAQ: TSLA) CEO Elon Musk testified for the second day on Monday, attempting to explain the thought process behind his controversial “funding secured” tweet from 2018, rejecting the notion that it was partially a joke.

Musk, Tesla, and company directors are facing a shareholder lawsuit over a tweet in which the billionaire stated that he was considering taking Tesla private for $420 per share and had “funding secured.” Those two words forced Musk to resign as Tesla’s executive chairman and pay millions in fines and legal fees.

When questioned, Musk denied that he chose the $420 price as a joke because of its significance to marijuana enthusiasts, but rather as a roughly 20% premium on the stock price at the time.

“420 price was not a joke,” he testified. “There is some karma around 420 although I should question if that is good or bad karma at this point.”

At the time, Musk had discussed the funding required to take Tesla private with executives from the Saudi sovereign wealth fund. However, during his testimony in a California courtroom on Monday, Musk stated repeatedly that he believed he had a deal with the Saudi Arabia Public Investment Fund (PIF).

“My understanding was that they would proceed with the transaction deal,” Musk said. At another point, Musk stated that the head of the Saudi fund “had been unequivocal in his support for taking Tesla private when we met,” but later “appeared to be backpedaling.”

When questioned on how he was confident on the funding (which led to his tweet) despite no agreement having been inked, Musk said “of course, in the course of going private there are documents that are being exchanged… it’s like buying a house.”

Plaintiff’s counsel shot back by saying Musk “might be able to buy a house without paperwork, but for the rest of us there is a process.”

Musk claims that the PIF purchased 5% of Tesla stock without any paperwork or negotiations, leading him to believe that a go-private transaction would work similarly.

“So you would expect less documentation for a multibillion dollar taking private transaction of a public company than for buying a house? Is that your testimony?” the plaintiff’s counsel asked Musk.

Earlier, Musk has requested to move the upcoming trial for a shareholder lawsuit out of San Francisco, saying that bad press about his takeover of Twitter could cause potential jurors to be biased against him.

Beyond that, many observers noted peculiar details in Musk’s testimony. At one instance, the new owner of Twitter seemed to have misspoke that the social media platform’s character limit is at 240 instead of 280 characters.

Then the plaintiff lawyer also accidentally referred to Musk as Mr. Tweet, which elicited laughter in the courtroom.

Musk did admit twice in his testimony that the tweets were significant, that he believed investors would rely on them, and that they would cause prices to rise.

The Tesla CEO also admitted that he was attempting to beat the Financial Times scooping the news of the Saudi funding; the news outfit requested Musk for a comment, giving him a notion that they knew about the go-private plans. His argument is that he needed to beat the story with his tweet in order to “make sure all investors would be on equal footing.”

Musk’s counsel Alex Spiro meanwhile took the chief executive back to a previous testimony in which he stated that Google had a “standing interest” in acquiring Tesla in 2018. Although, Twitter user E.W. Niedermeyer noted that this claim is highly doubtful as Musk reneged on talks with Google back in 2013, taking the “AutoPilot” concept from the talks and then brought it himself to the market.

The shareholder lawsuit claims that Musk manipulated the electric carmaker’s stock price in 2018 when he tweeted that he was thinking of taking the company private at $420 per share and had “funding secured.” Last spring, plaintiffs won an early victory when federal judge Edward Chen ruled that Musk had “recklessly made the statements with knowledge as to their falsity.”

The current trial aims to determine if Musk’s tweet did impact Tesla’s stock price and whether he should be accountable for potential damages.

The same tweet has also cost him a $40 million settlement with the US Securities and Exchange Commission. Furthermore, it also resulted in an agreement between Musk and the regulatory agency in monitoring the chief executive’s tweets pertaining to Tesla.

Musk challenged the agreement, saying he “felt forced to sign the consent decree in 2018 [when] Tesla was a less mature company and the SEC’s action stood to jeopardize the company’s financing.”

The SEC shot back, essentially claiming that even if the 2018 agreement is thrown out, the agency can still include Musk’s tweets under its investigation if they relate to Tesla’s disclosures and procedures.

On top of this current legal bout, Musk is also being sued to defend why he’s worth the massive Tesla pay package — worth nearly $56 billion in 2018 when it was approved, with a net value of $50.9 billion today — that helped make him the world’s wealthiest person. 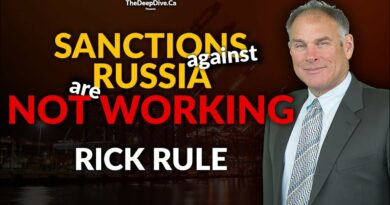 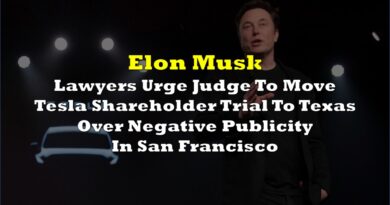 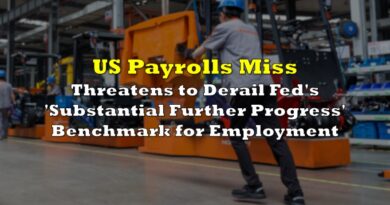