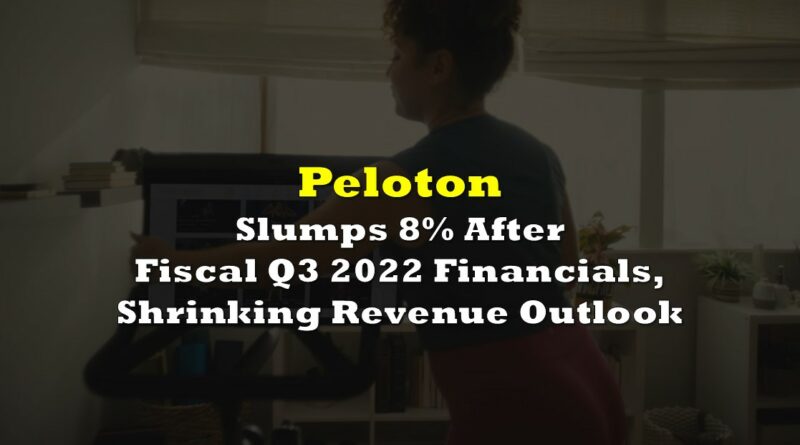 Following the results, the firm’s shares dropped by 8.7% on the day, while continuing to hit new lows.

“The primary driver of the year-over-year revenue decline was a reduction in consumer demand exiting the pandemic’s peak,” the company said in its release.

Gross margin slid down to 19.1% during the quarter from 24,7% last quarter and 35.2% last year, mainly driven by a negative margin in its Connected Fitness division. The company said the business unit was “pressured by the August 2021 Peloton Bike price reduction, impact of accessory inventory write-down, higher logistics expenses per delivery, increased port and storage costs, and charges associated with the voluntary recall of Tread+ product.”

The firm also widened its net loss to US$757.1 million from US$439.4 million net loss last quarter and US$8.6 million net loss last year. This is mainly due to the company doubling up its operating expenses quarter-on-quarter, representing 95.4% of the quarterly revenue. The huge jump in expenditures included US$158.5 million in restructuring expense, US$181.9 million in goodwill impairment, and US$32.5 million in impairment expense and loss on disposals.

The net loss translated to US$2.27 loss per share.

“Some of the challenges we face are systems related which tax our productivity and speed of decision making, as well as our speed of execution. And some of the challenges have resulted from poor execution, like last quarter’s increased use of 3PL partners for last mile distribution,” said CEO Barry McCarthy in a letter to shareholders. “The strategy wasn’t flawed, but our execution was. Better systems. Better decision making. Better execution. We’re working on it.”

McCarthy, who replaced former CEO John Foley in February 2022, said he focused on three priorities since joining the firm: “stabilizing the cash flow, getting the right people in the right roles, growing again.”

While the Peloton chief said that stabilizing the cash flow “has been an exercise in balance sheet and P&L management,” the firm recorded a wider net operating cash burn during the quarter of US$670.1 million compared to the cash burns last quarter and last year at US$446.6 million and US$151.2 million, respectively.

Free cash flow also ended at an outflow of US$746.7 million during the quarter compared to the outflows of last quarter’s US$546.7 million and last year’s US$204.0 million. But despite the trend, McCarthy expects “FCF to be meaningfully better in Q4 vs. Q3.”

The cash burns also led to the firm ending with a shrinking cash balance. “We finished the quarter with US$879 million in unrestricted cash and cash equivalents, which leaves us thinly capitalized for a business of our scale,” said McCarthy. The firm said it has recently signed a US $750 million, 5-year term debt with JP Morgan and Goldman Sachs.

At the end of the quarter, the company also has book value of inventories totaling US$1.41 billion, pushing the balance of current assets at US$2.57 billion. In contrast, the current liabilities ended at US$1.03 billion.

“As we begin to sell down our excess inventory, the current cash flow headwind should become a tailwind in FY23. Our goal is to restore the business to positive free cash flow in FY23,” added McCarthy.

“Getting the right people”

McCarthy also shared in his letter to the shareholders that the firm’s new supply chain head Andy Rendich, with the help of board member Angel Mendez, “is making great strides” in managing its supply chain issues.

When asked in an earnings call about the specifics of their contributions, McCarthy said that their team has allowed better visibility in looking at the said issues with the supply chain.

“About the supply chain, let me say that I don’t think we had the visibility that maybe we would have wanted… And so, Andy and his team have taken important steps in addressing all of those issues. And in the process, we have a much greater visibility into how the supply chain issues affect the business overall. So, I’m – it was an area where we had work to do,” said McCarthy.

In February 2022, when McCarthy was announced to succeed in the CEO position, the company also said it will be cutting 2,800 jobs, impacting 20% of its corporate positions, to cope with the declining demand and increasing losses. When the year started, the firm also halted the production of its bikes and treadmills due to low demand.

“My goal for Peloton is to become a global connected fitness platform with 100 million Members. That’s equivalent to roughly half the world’s global gym memberships. It’s a long, long way from where we sit today,” said McCarthy.

The firm recorded 7.0 million members at the end of the quarter, showing a slow down in acquiring memberships coming from last quarter’s 6.7 million and last year’s 5.4 million.

The firm is even targeting a modest subgrowth next quarter, expecting around 2.98 million Connected Fitness subscriptions by the end of the succeeding three months.

“Our Q4 ending CF subscriber forecast of approximately 2.98 million incorporates a modest negative impact from our Subscription pricing increase starting June 1. As anticipated, we have seen a small increase to
cancellations due to the Connected Fitness subscription price increase announcement, but we expect the impact to moderate as we progress through FY23,” explained McCarthy.

“We’re making steady progress on our first two priorities (cash flow and talent density). What about growth? In the months ahead you’ll see us evolve our go-to-market strategy to grow faster,” said McCarthy. Some growth strategies outlined include broadening distribution to its retailers, driving value proposition for its digital app, international expansion, and boosting its rental program Fitness-as-a-Service.

In the earnings call, McCarthy said that the overarching growth strategy would be centered on Connected Fitness.

“We need to be good at hardware, but being good at hardware is not nearly sufficient,” he added. “And that calls for, I think, a shift in the investment priorities of the business at least as compared with where we spent money historically in order to double down on the things that have made us great.”

Information for this briefing was found via Edgar, Seeking Alpha, and the companies mentioned. The author has no securities or affiliations related to this organization. Not a recommendation to buy or sell. Always do additional research and consult a professional before purchasing a security. The author holds no licenses. 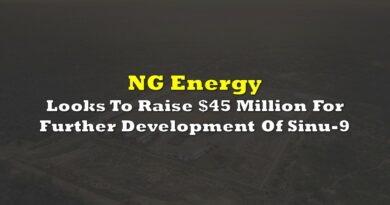 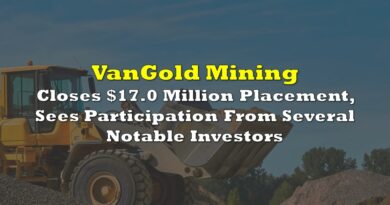