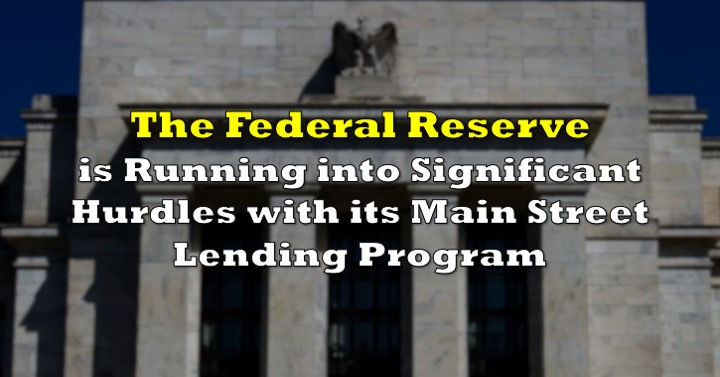 The Federal Reserve had previously announced it will be providing loans for middle-sized businesses via its Main Street Lending Program, however, it is shaping up to be a much more difficult task than initially anticipated.

The goal of the $600 billion Main Street Lending Program is to provide relief loans for those businesses and companies that do not quality for either the Small Business Administration loan program because they are too big, or the federal government’s other emergency lending arms which are focused towards very large corporations.

Typically, the Federal Reserve does not intervene via such means, but given the unprecedented financial hardships unveiled by the coronavirus pandemic, it has decided to provide a middle market program which allows a company to get a loan from a bank, and then that bank will pass up to 95% of that debt to the central bank.

The Main Street lending program is applicable to the companies that fall between the cracks of other lending markets, including those companies that have up to 15,000 employees whilst making under $5 billion in revenue in 2019. The qualifying companies seeking financial help can apply for loans up to $25 million, or can refinance their debt for up to $200 million, but, the loans cannot be allocated towards compensating executives, or shareholder distributions.

However, one of the main issues that arises from the setup of such a transaction is the increased risk of the Federal Reserve being left with bad loans, due to the over-generosity of the program. On the other hand though, the Fed doesn’t want to set the terms of the lending program so that it is not attractive enough for struggling companies to participate in. Thus, finding the balance between those two risks is turning out to be tougher than expected.

As of current, the lending program does not incorporate loan forgiveness, and is instead anticipating that all taxpayer-funded debt is returned. Senator Mark Warner on the other hand, is urging the Federal Reserve to be more realistic, and come to terms with the fact that not all of the $75 billion will ever be recouped – much like the relief programs offered under the CARES Act. He is suggesting that the Fed ease some of the restrictions accompanying the Main Street lending program loans, or consider turning the loans into grants or subsidies.

Despite coming to terms with the stark reality of not having a majority of the taxpayer-funded loans returned, Federal Reserve Chairman Jerome Powell reminded Sen. Warner that it is illegal for the central bank to turn loans into grants. In addition, there are still going to be some companies that fall through the cracks of the Main Street lending program as well, which can be attributed to uncertain future revenues, or too much debt beforehand.

Powell clarified that the lending program is unable to help those which are deemed unviable – which is a problem that could become more profound if the coronavirus pandemic continues to wreak havoc on the US economy.

Information for this briefing was found via the Wall Street Journal and the Federal Reserve. The author has no securities or affiliations related to this organization. Not a recommendation to buy or sell. Always do additional research and consult a professional before purchasing a security. The author holds no licenses. 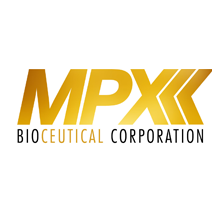 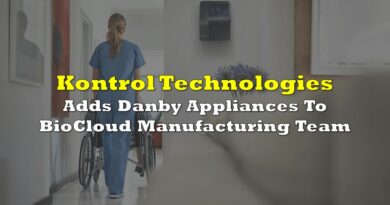 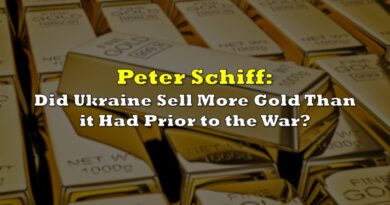 Peter Schiff: Did Ukraine Sell More Gold Than it Had Prior to the War?