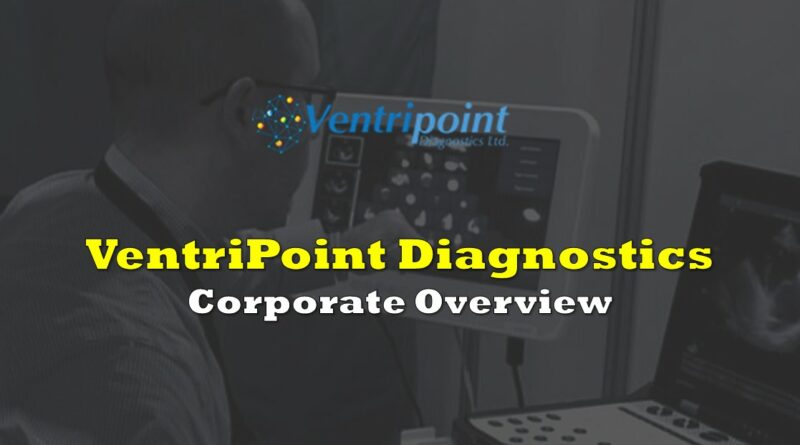 VentriPoint Diagnostics Ltd. (TSXV: VPT) is a small-cap medical device company that develops and commercializes cardiac diagnostic tools. VentriPoint is considered an industry leader in echocardiography, a test which produces live images of a patient’s heart.

More specifically, the company’s VMS™ products, powered by its proprietary Knowledge Based Reconstruction (KBR) artificial intelligence algorithm, creates accurate heart volumetric measurements and a 3-D image of the heart from a 2-D electrocardiogram in just minutes. VentriPoint’s VMS™+ 3.0 System interfaces with all standard echocardiograph 2D ultrasound machines, including those made by GE, Siemens, Philips, and Toshiba.

In turn, this affordable alternative to a costly magnetic resonance imaging (MRI) procedure provides a cardiologist the ability to determine the severity and progression of the disease with real-time information. (MRI machines utilize a magnetic field and computer-generated radio waves to create detailed images of organs and tissues.)

The investment thesis for VentriPoint is based on the following:

Presently, Ventripoint has the only technology available that is able to provide an accurate model of the right ventricular via 2D imaging from an echocardiogram. Most imaging of the right side of the heart has to occur via MRI’s that are time consuming, present longer lead times due to fewer devices being present at hospitals, and are as a result far costlier than Ventripoint’s offering.

VentriPoint’s VMS™+ 3.0 System, which can be installed remotely and be immediately operational and integrated into a hospital’s infrastructure, creates an extremely accurate 3D model of a patient’s heart from almost any 2D electrocardiograph device. The company’s KBR algorithm uses an MRI shape catalog and anatomical landmarks to create the 3D model. Notably, the model provides data regarding the performance of the heart’s right ventricle, which pumps blood under low pressure through the pulmonary artery. The blood then moves to the lungs where it receives fresh oxygen.

The system calculates the key ejection fraction, EDV and ESV statistics of the right ventricle within 10% of that determined by an expensive MRI test with a 95% confidence level. The ejection fraction measures how well the right ventricle pumps blood with each heartbeat. The EDV is the filled volume of the ventricle prior to contraction (around 120 milliliters of blood in a typical heart), and the ESV is the residual volume in the ventricle after ejection (about 50 milliliters of blood in a healthy heart).

The VMS™+3.0 system has U.S. FDA pre-market clearance (October 2019), a Health Canada license (June 2019), and a European CE mark (June 2019) for all patients where volumetric heart measurements are needed. The CE mark, which means that a product meets the essential requirements of all relevant European Medical Device Directives, is required in order to sell a medical device in the European Union.

By the fall of 2020, ten VMS™+ 3.0 systems were installed, including three at some of world’s most well-known hospitals in the world, over the six-week period from late September 2020 through early November 2020: the Erasmus-Sophia University Medical Center in Rotterdam; the Netherlands; the University of Texas MD Anderson Cancer Center in Houston, Texas; and the Peter Munk Cardiac Center in Toronto, the largest cardiac center in Canada.

Additionally, the VMS™+ 3.0 System may have particular use treating four types of patients:

The latter patient category may be the most pronounced going forward in a post-pandemic world. It seems the company has developed the right tech at the right time, given recent findings published in JAMA, a clinical medical journal, related to the impacts of COVID-19 on the heart.

The findings, headlined as “COVID-19 and Heart Failure With Preserved Ejection Fraction,” pertains to the finding that myocardial injury (in layman terms, injury to the heart) may occur in some individuals with COVID-19. In particular, the journal article identifies that in a study of 100 patients with COVID-19 in Israel that had an echocardiogram conducted, the most common abnormalities were right ventricular dilation at 39%, and left ventricular diastrolic dysfunction at 16%.

We know that this likely sounds confusing to those of us that are not medical-terminology inclined. To rephrase this in a simplified manner, a study of 100 patients with COVID-19 in Israel took place, with patients having ultrasounds (echocardiograms) conducted on their hearts. Of those that participated, 39 were found to have had the right side of their heart enlarged as a result of the disease. Furthermore, 16 of the patients studied had an issue with the left side of their heart where the heart was having trouble relaxing between heart beats, meaning the heart had to work much harder to pump less blood through the body.

SALES AND DISTRIBUTION IN CHINA

In 2020, VentriPoint’s Chinese JV partner, Yutian Medical, installed the QAS™ System (the VMS™ name in China) in eight leading hospitals in China, including in the heavily populated cities of Shanghai, Hangzhou, Wenzhou, and Zhengzhou; and in three medical universities in the Anhui Province. Yutian has appointed distributors in other regions of China as well. According to statista.com, there are around 34,000 hospitals in China, and 1,000 new facilities are built each year.

In the time since, the company has expanded distribution in the region significantly. The company meanwhile has also begun certification for the use of the technology for COVID-19 patients within the country.

The World Heart Association reports that China has one of the highest rates of cardiovascular deaths in the world, as hypertension and alcohol and tobacco use are quite common among its citizens. Perhaps 20% of all Chinese have cardiovascular disease.

Dr. George Adams – Chairman. Dr. Adams is a scientist, a serial entrepreneur and financier. He was previously CEO of Amorfix Life Sciences (TSX: AMF) from 2005-2010. He was Chairman of Sernova Corp. (TSXV: SVA) and President and CEO of the UT Innovations Foundation from 1999 until 2004. Dr. Adams has been instrumental in founding over 30 companies which have raised in excess of $100 million; he has been a Director of ten venture capital funds and ten start-up companies.

Robert Hodgkinson – Director. Mr. Hodgkinson has over 40 years of experience in public and venture capital markets. He has raised $150,000+ of capital for numerous companies and is an experienced corporate director, senior executive and adviser.

Below we list a few comparable medical technology companies to VentriPoint.

Some potential catalysts that could have a significant impact on VentriPoint’s share price include:

In a fairly broad affirmation of the effectiveness and reasonable per-patient costs of VentriPoint’s VMS™ technology, a number of leading hospitals in the U.S., Canada and China have installed this system. If additional hospitals sign on as well, particularly in China, investors could assign a much higher valuation to VentriPoint’s shares. Furthermore, the company in that case could become an attractive takeover target.

Outside of this, the trailing effects of the global COVID-19 pandemic, while unfortunate, may carry significant tailwinds for VentriPoint given the lasting impact that this virus has on a large portion of patients. If approved for such use, the impact could be large for this small cap firm. 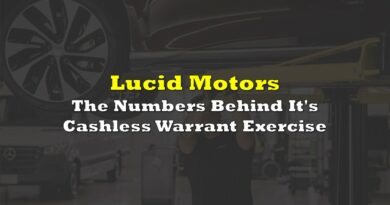 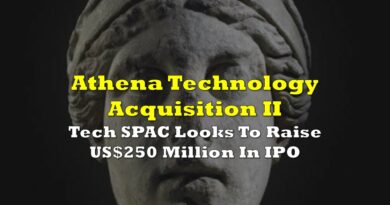 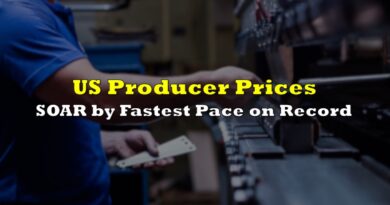 US Producer Prices Soar By Fastest Pace on Record