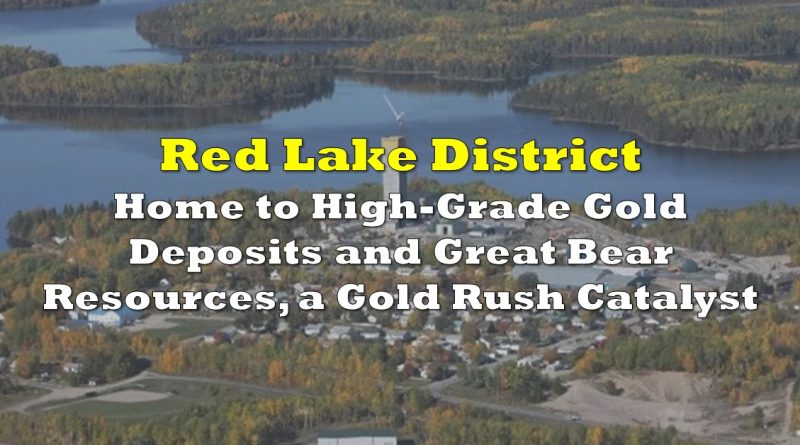 The Red Lake mining district in Northwestern Ontario is best known for its high-grade gold deposits, with historical production exceeding 30 million ounces of gold, mostly from the iconic Campbell and Red Lake gold mines and ten smaller mines. A number of factors such as declining gold reserves, global economic instability, and a rise in the price of gold have led to a resurgence in gold exploration. Recent new discoveries in the Red Lake district, with Great Bear Resources (TSXV: GBR) leading the pack, have led to what amounts to another gold rush.

Commonly referred to as the Campbell-Red Lake gold deposit, the Campbell and Red Lake mines are located in the Red Lake Uchi Subprovince – Superior Province Greenstone Belt, considered to be one of Canada’s largest Archean gold deposits. The bedrock in Red Lake, primarily basalt, was formed 2.85 billion years ago during the early Neoarchean period, and gold has been dated back 2.7 billion years ago during the Uchiyan Phase of the region’s formation.

Most of the large gold deposits can be found in the east to west “mine trend”, while smaller deposits, usually found in quartz veins, are hosted in the “East Bay trend” that angles in a northeast to southwest direction.

The lesser explored part of the Red Lake district is known as the Birch-Uchi Greenstone Belt in the Uchi Subprovince of the Canadian Shield. The area is to the east of the main Red Lake mining camp, and is three times larger. Iron-hosted gold deposits have been found in what are known as folded iron formations. A prime example of this is Newmont (TSX: NGT) Goldcorp’s Musselwhite Mine.

The Birch-Uchi Greenstone Belt also contains volcanogenic massive sulphide (VMS) deposits hosted by felsic volcanic rocks. Aside from gold, VMS deposits have the potential for base metals mines such as copper, lead, zinc, and silver. The VMS deposits found here share characteristics similar to the Horne Mine near Rouyn-Noranda, Quebec, and the Kidd Creek copper mine near Timmins, Ontario, the world’s deepest base metal mine. Base metal sulphide mineralization is associated with several greenstone belts north of Red Lake.

On March 31, 2020, the Australian gold miner Evolution Mining Ltd. completed the $375 million USD purchase of the Red Lake Mining complex from Newmont Goldcorp, with an additional $100 million tied to additional discoveries in the complex. The Red Lake Mining complex consists of the iconic Campbell and Red Lake Gold mines, and the nearby Cochenour Mine. This high-grade gold deposit has accounted for the production of 25 million ounces of gold since 1949, with an average grade of 20 g/t gold.

Evolution made this significant purchase in the belief that the current operations were under-capitalized. As such, in addition to upgrading the mines to reduce costs and increase productivity, they committed $50 million USD to a three year exploration budget to expand the mineral reserves. The thought is these measures would extend the mine life beyond the current expectation of 13 years.

It’s clear that with Evolution believing there is much more potential at Red Lake, it serves as an inspiration for a number of exploration companies to aggressively intensify their activity around Red Lake.

Newmont Goldcorp’s Musselwhite Mine, which initiated extraction in 1997, is located on the south shore of Lake Opapimiskan. It is essentially a fly-in/fly-out operation located almost 500 km north of Thunder Bay, Ontario and 300 km northeast of Red Lake by air.

Due to the remote location, Goldcorp had to build its own power infrastructure to support the mine. With estimated reserves of high-grade gold in excess of 2 million tonnes and an average grade of 5.4g/t gold, it is one of Canada’s richest gold mines. Despite the location the richness of it has more than justified the cost of operations. .

The main attraction of high-grade gold deposits is that they can provide high-margin operations for miners. In late 2019, PureGold Mining (TSXV: PGM) began construction of its underground operations at its PureGold Red Lake Mine. On June 24, 2020, PureGold updated investors on the progress of its construction activities and predicted that they expect their first gold pouring during the fourth quarter of 2020. The property is estimated to have a resource of 2 million ounces of high-grade gold, and the company estimates an operating cost of roughly $800 per ounce. The high margins make the PureGold Red Lake Mine a potentially very profitable operation.

The Catalyst for the new Red Lake Gold Rush

The current Red Lake gold rush can be attributed to the exciting high-grade gold discovery made by Great Bear Resources in 2017. Their flagship 100%-owned Dixie project, covers an area of 300 square kilometres and is situated 25 km southeast of the town of Red Lake. The property contains four separate projects;

All of Great Bear’s properties are easily accessible by a reliable road system. They continue to actively develop the Dixie Project with the goal of adding to the multiple deposits discovered to date.

The main barrier to widespread exploration in the Red Lake Mining District is the difficulty in accessing prospective exploration targets. Therefore, much of the recent exploration activity is in reasonably close proximity to the Red Lake mining camp, which has a well established road network and a mining-friendly infrastructure.

The success of Great Bear’s Dixie Project has attracted a number of other junior explorers to stake claims and acquire properties in close proximity to the Dixie property.

On June 23, 2020, Portofino Resources (TSXV: POR) announced completion of a recent follow-up field program on their 5120 hectare South of Otter project, located 8 km east of the Dixie Project. Their field program identified promising new mineralization similar to the Dixie Property and other developmental deposits in the Birch-Uchi belt. Much of their current exploration work involves building upon historical geophysics, rock sampling, and drilling data. This all will assist Portofino in determining the viability of the project.

On July 6, 2020, BTU Metals Corp. (TSXV: BTU) updated investors with the results of their recent drill program. They also provided some guidance for their upcoming summer drilling program at their Dixie Halo project, which shares a 35 km border with Great Bear’s Dixie property. Indications are that some of the Great Bear discoveries follow a trend that crosses over into BTU’s property, fueling speculation and optimism that future drilling may produce comparable results. BTU is specifically exploring for high-grade gold mineralization within a VMS-type geological system that also contains copper and zinc.

On May 20, 2020, Falcon Gold Corp. (TSXV: FG) announced that it applied for an exploration permit for its Bruce Lake Gold Project, found 16 km west of the Dixie project. The Company plans to do line cutting, trenching and some drilling. A permit will allow the company to perform overburden trenching, line cutting, and diamond drilling to follow-up on gold targets identified by past work programs.

West Red Lake Gold Mines Inc. (CSE: RLG) has attracted investor interest in recent months as it begins a follow-up drilling program on its West Red Lake project, found 20 km west of the Red Lake mine complex. In January 2020, they had encouraging high-grade gold showings of 12.14 g/t over 13 metres. What makes this project interesting is that the property is host to three past producing gold mines, including the Rowan joint venture, 38% owned by Evolution Mining.

Adjacent to the West Red Lake Gold property is that of CR Capital Corp (TSXV: CIT), whom last week announced that they have entered into an option agreement to acquire the Mount Jamie North property in the Red Lake camp. The property lies 300 metres along strike from the former producing Mount Jamie Mine, with a total of three former producing mines lying along strike to the east of the property. The Mount Jamie North property consists of a total of 445 hectares through 30 mineral claims.

The bulk of the activity continues to be around the Red Lake mining camp. The success and excitement of Great Bear’s discoveries, though, has now attracted the attention of a number of junior firms prepared to undertake exploration activity in the harsher areas of the region.

Newrange Gold Corp (TSXV: NRG) is conducting grassroots exploration in the Birch-Uchi Greenstone belt in the vicinity of the past-producing Argosy Mine. This mine extracted approximately 102,000 ounces of gold and 10,000 ounces of silver from 1934 until 1952 (when $35/oz gold made mining operations cost-prohibitive).

Newrange’s 3,850 hectare North Birch Project is in a geological setting identified as a sheared iron formation that contains quartz vein gold, similar to that of the Musselwhite Mine located 200 km to the northeast and just 4 km from the Argosy Mine. Early Access to the area is primarily by float plane or helicopter, although there are some existing logging roads and new roads are being built. Newrange will be conducting an airborne magnetic and electromagnetic survey during the summer of 2020. Induced Polarization and mapping will then help determine the best potential drill targets.

The largest known gold deposit in the Birch-Uchi belt, with indicated reserves of 4.7 million ounces, is the 41,943 hectare Springpole Gold Project owned by First Mining Gold Corp (TSX: FF). While not currently in production, it is considered to be one of the largest undeveloped gold projects in Canada. First Mining is preparing a pre-feasibility study to determine the economic viability of putting the property into production as an open pit mine.

Whenever there is a new discovery that creates a good deal of excitement in the mining exploration industry, companies rush to the vicinity of the strike zone and stake claims as close to the strike as possible.

There are any number of reasons for this:

1)  Attract promotional buzz for their stock.

2)  Claim squatting enables a junior company to sit on claims in the hopes that activity in the area may compel a competitor to either acquire the claims or suggest a joint-venture.

3) A legitimate interest in exploring the property.

The “area play” phenomenon can create a quandary for investors.

The above are all perplexing questions and the answers are not simple or definitive.

Mining exploration is a high-risk/high-reward proposition at the best of times. A promising discovery that appears to be a guaranteed success can fizzle out over time as more exploration and development work cannot justify an economically sound extraction plan. It can take years to develop a promising property into a mine. And during that time, unexpected world events, social upheaval, market crashes, recessions, and commodity cycles can impact the performance of one’s investment portfolio – and the need for whatever the mine is producing.

Well-timed purchases of the shares of exciting exploration companies can generate incredible returns, and often over relatively short periods of time. Because of this excitement, even a kind of mania at times, mining exploration can attract huge interest. The term “blue sky” comes from the perception of unlimited upside of a promising exploration play. Obviously, however, nothing in the market is ever guaranteed, or even necessarily logical.

Where possible, it always behooves investors to do proper research into any prospective investment to better understand the risks, the potential, the experience of the management team, and the quality of the underlying project.

For investors interested in gold exploration, familiarity with the jurisdiction and specific exploration region can be very important. The Red Lake Mining District has a long and storied history of successful high-grade gold mining.  As such, when companies report news from this area, a keen-eyed investor should look at it as perhaps presenting an opportunity and do their due diligence. 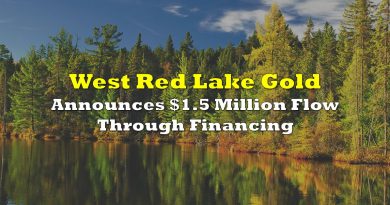 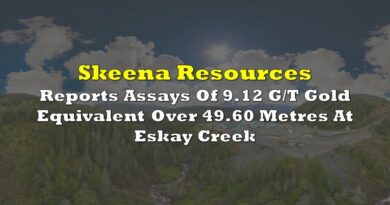 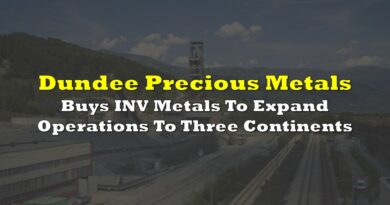