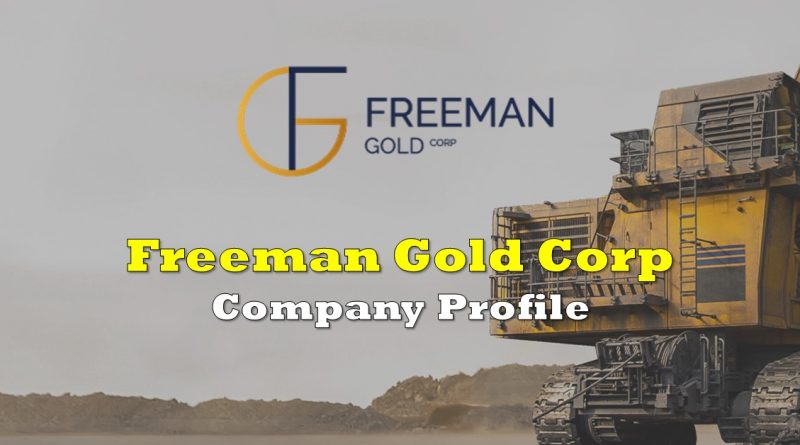 Freeman Gold Corp (CSE: FMAN) is a Canadian-based mineral exploration company. They own the Lemhi Gold Project, which is located in Lemhi County, Idaho, United States. The Lemhi Project comprises 99 unpatented claims and 11 patented claims. It also owns the Comstock Property, located outside of Merritt, British Columbia in the Nicola Mining District.  The Company is primarily focused on the exploration and development of the Lehmi Gold Project.

Our investment thesis can be broken down into the following key points:

Overall, the Deep Dive sees a potential setup for the greatest gold rush in decades within the near term. Companies with large deposits, in safe regions, that trade at reasonable metrics, in our opinion have favorable risk/reward profiles for investors. We feel that Freeman gold fits this framework perfectly.

The newly staked claims cover areas in the vicinity and along strike of the known near surface, oxide gold mineralization outlined by over 355 drill holes between 1980 and 2012. The Lemhi Gold Project now consists of 7,515 acres of ground that has gone largely unexplored despite the discovery of the historical resource. The deposit  8 at the Lemhi Gold Project remains open at depth and in most directions. The surrounding area is unexplored and has not had the feeder system or source of mineralization discovered yet. The Company believes a comprehensive work program is warranted to follow up on key drilling intercepts such as:

Mr. Randall is a professional geologist that has over 20 years of experience in the mining and mineral exploration industry. Will was one of the early movers in the lithium brine industry, where he acquired, discovered and developed the Sal de los Angeles lithium brine project in Argentina. During his time running Sal de los Angeles, approximately $70M was raised for the development of the project which he led through resource development, feasibility, mine permitting and initial construction before being sold in an all-cash deal for $265M. Will has been involved in the successful development of several mining projects, including joint ventures with majors and national governments. Mr. Randall was raised in Argentina, before moving to Canada where he completed a BSc (Geology) and MSc. (Economic Geology) at the University of Toronto.

Victor is a seasoned capital markets professional specializing in the resource and high-tech sectors. Victor has over 25 years of advisory and leadership experience, having begun his career in 1992 as an investment advisor and then moving into management roles at both public and private companies. Organized and structured numerous equity and debt financings, mergers and acquisitions, joint venture partnerships and strategic alliances. Serves on the boards of various companies both private and public.

Simon was a partner of Cormark Securities for 4 years in institutional equity sales and also sat on their board of directors. He has eight years experience as a Director for CIBC World Markets and holds a B.A.A. from Sherbrooke University and is a CFA charter holder. Simon is currently a Director of Arena Minerals and has been involved, either as a director or an officer, with Mason Graphite, Belo Sun Mining, Alderon Iron Ore, Copper One and others.

Ronald has over 30 years international experience in the mining and capital markets industry, with over 20 years direct mining operations experience, including operations management, project construction and development, exploration, feasibility analysis and evaluations. Ronald has a wide range of hands-on experience in both underground and open pit mining operations including mine design and production planning, capital and operating budgets, feasibility and expansion studies, financial analysis and property valuation. Extensive experience in public, media and government relations and was directly responsible and credited with the greenfields discovery of a 3 million ounce gold mine in Ontario. Managed a team on the discovery of a 4 million-ounce gold mine in Western Australia.

Gold has been found throughout Idaho and the State is home to a good number of mining districts, with both lode and placer deposits. The biggest gold discovery in the state was the Boise Basin gold strike of 1862 – with millions of ounces of eventual gold recovered in the region. It is considered a relatively easier jurisdiction to get permitted where large oxide deposits are often found; a cheaper way of producing gold.

Here we break down how much each Idaho gold company is trading at relative to ounces in the ground.

At the Deep Dive, we like gold. We especially like projects in safe jurisdictions with large resource estimates. When gold juniors get frothy they often trade upto 10% of the price of gold for what they have in the ground. From our view, a company like Freeman trading at less than $30/oz in the ground is an indication of how early we are in the gold cycle.  We feel that as market sentiment continues to change, governments continue to paper over the economic effects of COVID, and the price of gold continues to climb, investors will start to pour into gold like a modern day gold rush. Overall, we feel Freeman offers a very attractive risk/reward profile based on the historic work, current valuation, jurisdiction and most importantly the economic environment.

Freeman Gold is a marketing client of the CanaCom Group. This is not intended to be used as financial advice. This Report is meant for general information purposes only. This report is not a buy or sell recommendation. The authors are not licensed financial advisors. We encourage readers to seek a licensed financial professional in making investment decisions. Please do your own due diligence and understand the risks before investing.

The information collected for this Report is collected on a best-efforts basis, and/or may not accurately reflect up to date information. All charts and diagrams refer to the prices as of market close Thursday, May 28, 2020.

For more information, please email info@canacomgroup.com – or on twitter @thedeepdive_ca